These six original plays which have been rehearsed, recorded and edited into a virtual staged reading presentation. Be inspired, have a glass of wine, and help the plays' development along with post-reading audience and artist talkbacks via YouTube Live’s chat option. 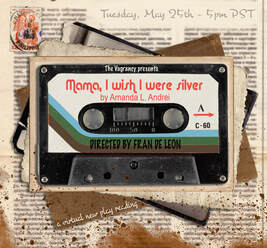 Synopsis: On a cold January day in 2020, Sofia and Ariel, two estranged Filipina American half-sisters, reunite in Virginia to clean out the photographs, papers, and letters of their recently deceased mother. When they find a cassette tape seemingly recorded on the 1972 declaration of martial law in the Philippines, when Ariel was born, they realize that what their mother left behind has a life of its own. If family history repeats itself, can we choose which ones to repeat?
RESERVE TICKETS to MAMA, I WISH I WERE SILVER 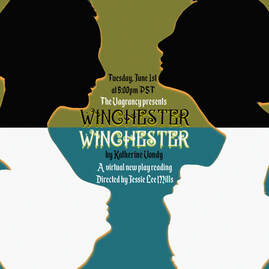 Synopsis: In the 990s, Southern England is constantly beset by Danish invaders, who plunder and destroy their ways across the Kingdom of Wessex.

In the 1990s, international relations continue to be a hot topic in the US, where the Clinton administration has just passed NAFTA.

And in the midst of these disparate political landscapes are Gænburh & Æscwyn and Jennifer & Amanda: two pairs of teenage sisters living in Medieval Winchester, England, and 20th-century Winchester, Virginia. As all of them are learning, the world is full of peril for young women--whether facing the physical threats of the wild animals in the forest or the emotional threats of public high school. How do individual lives get shaped by broader political and national events, and what can lives separated by an ocean and a millenium possibly have in common? WINCHESTER/WINCHESTER is a darkly comic and poignant exploration of the relationships between two pairs of sisters, living in sister cities a thousand years apart.
RESERVE TICKETS TO WINCHESTER/WINCHESTER 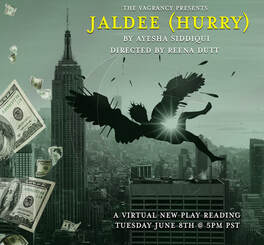 Synopsis: On Wall Street in 1987, Tariq, a young, charismatic, and ambitious Pakistani immigrant is clawing his way up the corporate banking ladder in hopes of becoming the youngest Vice President to date. As he ruthlessly chases his version of the American dream, we watch how it changes his friendships, relationships, values, and identity. JALDEE (HURRY) draws on the myth of Icarus, the excess of the 80s, and the historical event of Black Monday to explore the sacrifices we make in order to claim our worth and dignity in a world where we are treated as commodities.
RESERVE TICKETS TO JALDEE (HURRY) 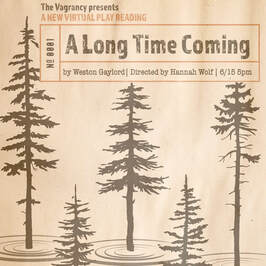 Synopsis: A forest is growing in Norway, planted to provide paper for a set of texts that will be printed in the year 2114. Each year between 2014-2114, an author is selected to write a text for this Future Library which will be preserved, unread, until the printing. The play tells two intertwining stories of one family: a novelist in 2022 who puts his mother’s life story into words, his great-granddaughter and her son in 2114 who journey from a California farm to a Norwegian forest for the opening of the Library, and a secret that has waited a century to come to light. Examining the voices we choose to preserve and those that are lost forever, A LONG TIME COMING looks toward a future that holds both disaster and hope.

Inspired by The Future Library Project, an artwork conceived by Katie Paterson in 2014 and commissioned by the City of Oslo’s Slow Space public art program.
RESERVE TICKETS TO A LONG TIME COMING

TUESDAY, JUNE 22ND @ 5 PM PST:  Talkback @ 7:30PM PST; Talkback Moderator: Janai Lashon
​
Synopsis: Nambi keeps dying and coming back: as an African princess traded to the New World only to drown in the Atlantic; as a suffragette bludgeoned to death by her lover; as a Black Panther shot down by a policeman’s bullet leaving the scene of a failed bombing. After each incarnation she wakes to find the Man in the White Coat.  Is he God or the devil? Or just the hospital orderly there to deliver her meds?

Eventually, she meets Helen, the place’s only other inmate, stabs an orderly and escapes only to find herself in a flooded subway, then is pulled away from her lover.  Soon, all her realities converge and the Man in the White Coat informs her that she is a mistake, perhaps an accident of the Hadron collider, not meant to exist at all. And yet… With the help of a mysterious little girl Nambi finally names her/Self and gains her freedom.
​
In a commencement speech at Barnard College, Viola Davis said, “The world is a wounded place because we are wounded.” And whether we think it’s cheesy or not, the only escape is love—of self and of others.  N*GGA B*TCH is about being on repeat and the insanity that is black womanhood: being and yet being invisible, the alternating accommodation and outrage, and downright “What the fuckery???” A riff on existence and letting go, N**GGA B*TCH is a story of grief, healing, and reinvention.
RESERVE TICKETS TO N*GGA B*TCH 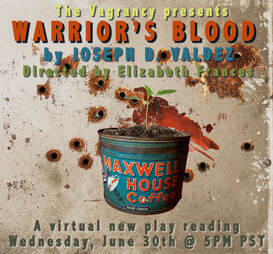 Synopsis:  Focusing on his “rags to middle-class” story, Johnny, a 38 year-old Navajo single father, has galvanized people across the county with his “American Dream” congressional campaign, and he has been selected to give the keynote address at the Democratic Convention. However, a week before he is set to deliver the speech, his grandfather is placed under hospice care and only given a few months to live. As he fights for his life, Grandpa finds himself stuck in his past—World War 2, fighting across Normandy.  As Johnny attempts to come to terms with the imminent passing of the man who raised him, he must also find a way to manage attacks on his campaign while finding his 16 year old daughter, who has run away. In investigating identity, legacy, and intergenerational trauma, WARRIOR’S BLOOD examines a Native family’s struggle to thrive in a 21st century America.
RESERVE TICKETS TO WARRIOR'S BLOOD